Honda Accord: Inboard Joint Side

1. Wrap the splines with on the driveshaft vinyl tape (A) to prevent damaging the inboard boot. 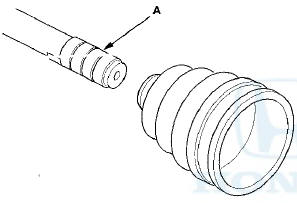 4. Install a new circlip (C) into the driveshaft groove.

Always rotate the circlip in its groove to make sure it is fully seated.

5. Fit the rollers (A) onto the spider (B) as shown, and note these items: -Reinstall the rollers in their original positions on the spider by aligning the marks (C) you made.

-Hold the driveshaft pointed up to prevent the rollers from falling off.

6. Pack the inboard joint with the joint grease included in the new inboard boot set. 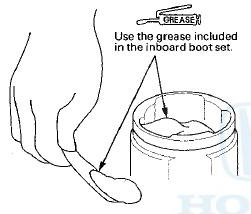 -Hold the driveshaft so the inboard joint is pointing up to prevent it from falling off.

9. Adjust the length (A) of the driveshafts to the figure as shown, then adjust the boots to halfway between full compression and full extension. Bleed excess air from the boots by inserting a flat-tipped screwdriver between the boot and the joint 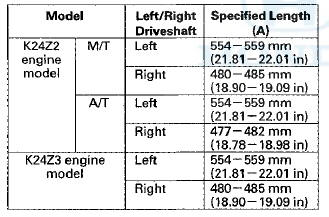 11. Fit the boot ends onto the driveshaft and the inboard joint, then install a new double loop band (A) onto the boot (B).

NOTE: Pass the end of the double loop band through the clip (C) twice in the direction of the forward rotation of the driveshaft.

14. Thread the free end of the band through the nose section of the commercially available boot band tool (KD-3191 or equivalent) (A), and into the slot on the winding mandrel (B).

15. Using a wrench on the winding mandrel of the boot band tool, tighten the band until the marked line (C) on the band meets the edge of the clip.

16. Lift up the boot band tool to bend the free end of the band 90 degrees to the clip. Center-punch the clip, then fold over the remaining tail onto the clip. 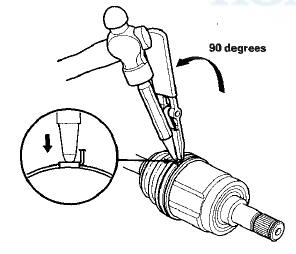 18. Bend the band end (A) by tapping it down using a hammer.

NOTE: -Make sure the band and the clip do not interfere with anything on the vehicle, and the band does not move.

-Clean any grease remaining on the surrounding surfaces.

21. Close the hook portion of the band using commercially available boot band pliers (A), then hook the tabs (B) of the band. 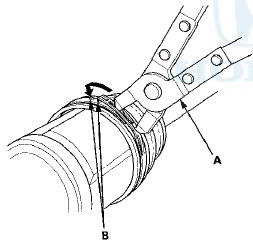