Honda Accord: Opening the Hood 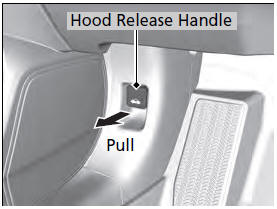 1. Park the vehicle on a level surface, and set the parking brake.
2. Pull the hood release handle under the lower left corner of the dashboard.
- The hood will pop up slightly. 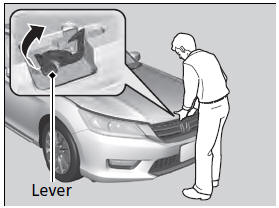 3. Push up the hood latch lever in the center of the hood to release the lock mechanism, and open the hood. 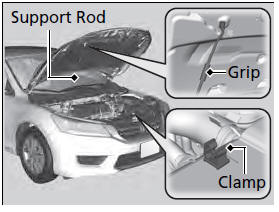 When closing, remove the support rod, and stow it in the clamp, then gently lower the hood. Remove your hand at a height of approximately 12 inches (30 cm) and let the hood close. 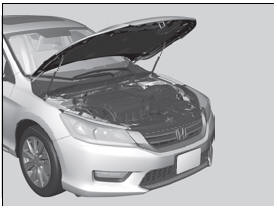 4. Lift the hood up most of the way.
- The hydraulic supports will lift it up the rest of the way and hold it up.

When closing, lower it to approximately 12 inches (30 cm), then press down firmly with your hands.

Do not open the hood when the wiper arms are raised.

The hood will strike the wipers, and may damage either the hood or the wipers.

When closing the hood, check that the hood is securely latched.

If the hood latch lever moves stiffly, or if you can open the hood without lifting the lever, the latch mechanism should be cleaned and lubricated.

Maintenance Items Under the Hood

Oil is a major contributor to your engine's performance and longevity. If you drive the vehicle with insufficient or deteriorated oil, the engine may fail or be damaged. This seal indicates ...

Trunk Pass-through Lid Replacement
4-door NOTE: Take care not to tear or damage the seat covers. 1. Fold down the rear seat-back. 2. Remove the screws, and release the hooks (A), then remove the trunk pass-through lid (B). 3 ...