1. Remove the 72 mm shim (A) and oil guide plate M from the transmission housing (B). 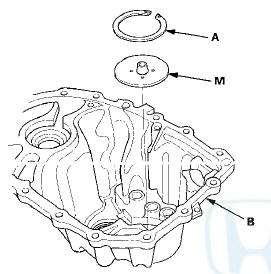 2. Thoroughly clean the 28 mm spring washer (A) and the 28 mm washer (B) before installing them on the clutch housing side ball bearing (C). Note the installation direction of the spring washer.

3. Assemble all of the mainshaft components.

NOTE: Refer to the Exploded View, as needed, during the assembly (see page 13-38).

4. Install the mainshaft assembly into the clutch housing.

5. Place the transmission housing over the mainshaft and onto the clutch housing.

6. Tighten the clutch and transmission housings with several 8 mm bolts.

NOTE: It is not necessary to use sealing agent between the housings for this procedure.

7. Lightly tap on the mainshaft using a plastic hammer.

- Fit the holder over the mainshaft so its lip is towards the transmission. 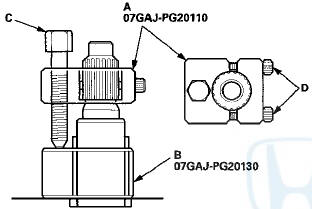 9. Fully seat the mainshaft by tapping its end using a plastic hammer.

14. With oil guide plate M and the appropriate size shim installed in the transmission housing, check the thrust clearance again to verity the clearance is within the standard. 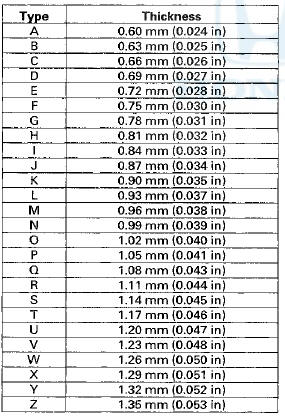 NOTE: Prior to reassembly, clean all the parts in solvent, dry them, and apply MTF to any contact surfaces. 1. Install the magnet (A) and the differential assembly (B). NOTE: Clean the magnet ...

Damper/Spring Disassembly, Inspection, and Reassembly
Exploded View NOTE: When compressing the damper spring, use a commercially available strut spring compressor (Branick MST-580A or Model 7200, or equivalent) according to the manufacturer's ins ...