NOTE: Put on gloves to protect your hands.

4. Detach the cable clip (A), and remove the screws (B, C) securing the latch (D), then remove latch through the hole in the door. Take care not to bend the outer handle rod (E), the latch cable (F), or the inner handle cable (G). 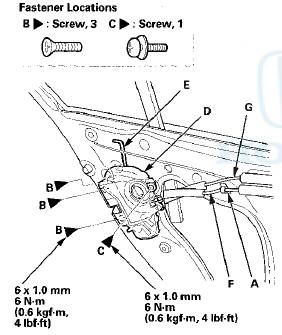 6. Disconnect the latch cable (A) and the inner handle cable (B) from the latch (C), and remove the inside sponge seals (D, E).

7. Install the latch in the reverse order of removal, and note these items; - If the clip is damaged or stress-whitened, replace it with a new one.

- After reinstalling the latch cable (D) and the inner handle cable (E) to the latch, attach the sponge seal (F) to the cable connecting areas on the latch as shown.

- Attach the inside sponge seal to the inside face of the protector as shown.

- After reinstalling the latch protector to the latch, attach the outside sponge seal to the protector and the latch as shown.

- Push the clip and the hook into place securely.

- Make sure the actuator connector is plugged in properly, and the outer handle rod is connected securely.

- Make sure the door locks and opens properly.

- When reinstalling the door panel, make sure the plastic cover on the door is installed properly .

4-door NOTE: Put on gloves to protect your hands. 1. Remove the door panel (see page 20-38). 2. Disconnect the power door lock actuator connector (A), and detach the harness clips (B). Remove ...

Transmission Reassembly
NOTE: Prior to reassembly, clean all the parts in solvent, dry them, and apply MTF to any contact surfaces. 1. Install the magnet (A) and the differential assembly (B). NOTE: Clean the magnet ...

Climate Control Power and Ground Circuit Troubleshooting
1. Check the No. 16 (7.5 A) fuse in the driver's under-dash fuse/ relay box. is the fuse OK? YES-Go to step 2. NO-Replace the fuse, and recheck. If the fuse blows again, check for a short in ...