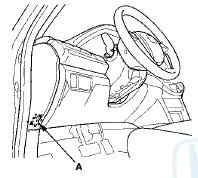 5. Make sure the HDS communicates with the vehicle and the SRS unit. If it does not communicate, troubleshoot the DLC circuit (see page 11-181).

7. Using apiece of tape (A), mark the location on the seat's outer cover (B) where the front riser cover meets the seat riser (C). The driver's seat positionsensor should read NEAR.

8. Move the seat back in small increments (about 5mm, 0.2 in) until the driver's seat position sensor reads NOT NEAR. The seat should be about 25 mm (1 in) from the front.

NOTE: It takes a few seconds for the HDS to display changes, so wait for about 5 seconds between each movement.

10. Disconnect the HDS from the DLC.

1. Position the front passenger's seat to the rear most position, and adjust the seat-back to the forward most position. Do not move the seat from this position. 2. Drive the vehicle, accelerate ...

A/C Compressor Clutch Check
1. Check the pressure plate for discoloration, peeling, or other damage. If there is damage, replace the clutch set (see page 21-75). 2. Check the pulley bearing play and drag by rotating the pu ...