NOTE: Put on gloves to protect your hands.

5. Pull the glass run channel (A) away as needed, and remove the bolt, then remove the center lower channel (B) by pulling it downward, 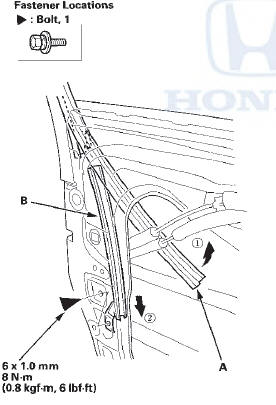 6. Detach the cable clips (A). Remove the screws (B, C) securing the latch (D), then remove the latch through the hole in the door. Take care not to bend the outer handle rod (E), the latch cable (F), or the inner handle cable (G). 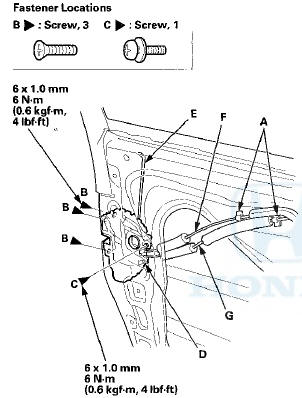 7. Remove the outside sponge seal (A), and remove the

releasing the hook (C), and remove the inside sponge

seal (D) from the latch. 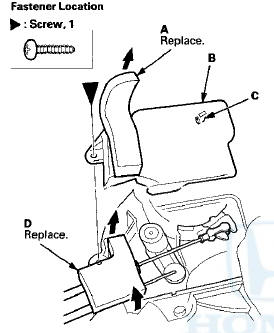 8. Disconnect the latch cable (A) and the inner handle

- After reinstalling the latch cable (D) and the inner handle cable (E) to the latch, attach the sponge seal (F) to the cable connecting areas on the latch as shown.

- Attach the inside sponge seal to the inside face of the protector as shown.

- After reinstalling the latch protector to the latch, attach the outside sponge seal to the protector and the latch as shown.

- If the clip is damaged or stress-whitened, replace it with a new one.

- Make sure that the actuator connector is plugged in properly, and that the cylinder cable and the outer handle rod are connected securely.

- Make sure the door locks and opens properly.

- When reinstalling the door panel, make sure the plastic cover on the door is installed properly .

- Push the hooks and the clip into place securely.

Exterior Care
Dust off the vehicle body after you drive. Regularly inspect your vehicle for scratches on painted surfaces. A scratch on a painted surface can result in body rust. If you find a scratch, promptly ...