Since the driver's and front passenger's airbags use the same sensors, both normally inflate at the same time. However, it is possible for only one airbag to inflate. This can occur when collision severity is near the threshold for airbag deployment. In such case, the SRS system will only deploy airbags when the protection provided by the seat belt is insufficient.

The indicator comes on when the front passenger's seat is occupied by a small adult or child who is leaning into the deployment path, or when an object (grocery bag, briefcase, purse, etc.) is in the seat. This indicates the passenger's side airbag is off and will not deploy; there is no problem with the side airbag. Ifthe passenger sits upright or moves to another seat, or you remove the object from the seat, the light should go off. There will be some delay between the occupant's repositioning, and when the indicator will turn on or off.

The indicator comes on ifthe weight on the front passenger seat is about 65 lbs (30 kg) or less. This indicates the passenger's front airbag is off and will not deploy. The front airbag is shut off to reduce the chance of airbag-caused injuries.

The main circuit in the SRS unit senses and analyzes the force of impact and, if necessary, ignites the inflator charges. If battery voltage is too low or power is disconnected due to the impact, the voltage regulator and the back-up power circuit will keep voltage at a constant level.

For the SRS to operate:

(2) The microprocessor must compute the signals and trigger the tensioners.

(3) The charges must ignite and deploy the tensioners.

(1) A front impact sensor must activate and send electric signals to the microprocessor.

(2) The microprocessor must compute the signals, and trigger the airbag inflators.

(3) The triggered inflators that received signals must ignite and deploy the airbags.

(1) A side impact sensor must activate and send electric signals to the microprocessor.

(3) The triggered inflators the signal must ignite and deploy the side airbags.

(1) A side impact sensor or the rear safing sensor must activate and send electrical signals to the microprocessor.

(2) The microprocessor must compute the signals and trigger the side curtain airbag and side airbag inflators.

(3) The triggered inflators that must ignite and deploy the side curtain airbag and side airbag at the same time. 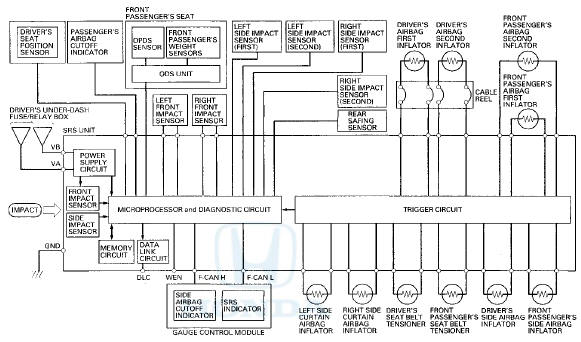 A self-diagnostic circuit is built into the SRS unit; when the ignition switch is turned to ON (II), the SRS indicator comes on and goes off after about 6 seconds if the system is operating normally. If the indicator does not come on, or does not go off after 6 seconds, or comes on while driving, it indicates a problem in the system. The system must be inspected and repaired as soon as possible.

NOTE: Before you disconnect the negative cable from the battery for troubleshooting, refer to Battery Terminal Disconnection and Reconnection (see page 22-91). 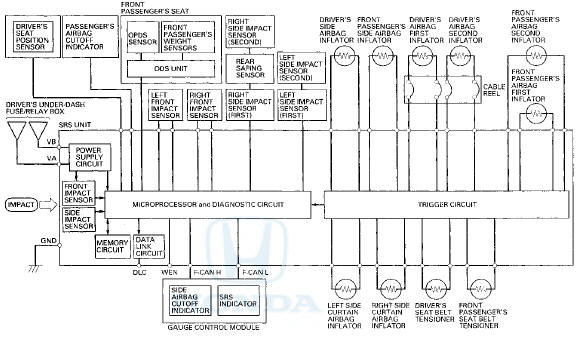 SRS Unit Inputs and Outputs at Connector A (39P) 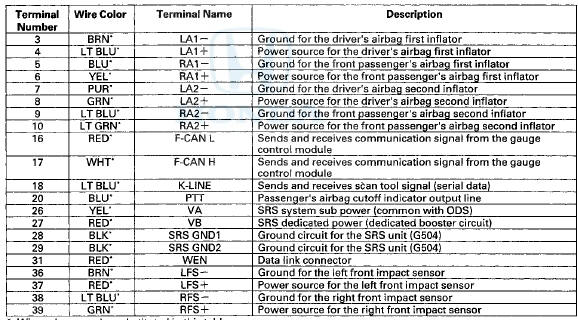 SRS Unit Inputs and Outputs at Connector B (33P) 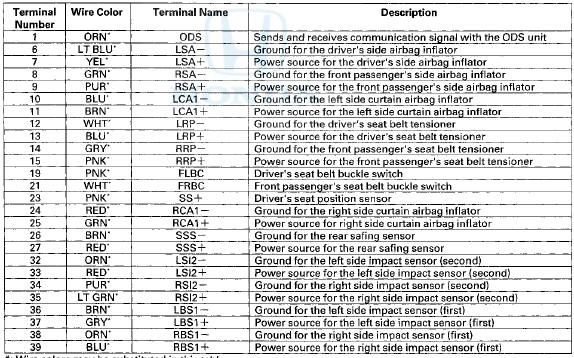 SRS Unit Inputs and Outputs at Connector B (39P) 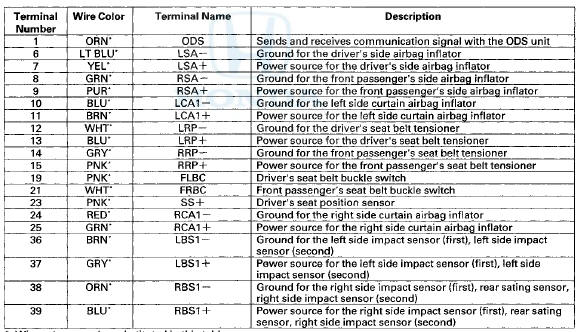 Compact Spare Tire
Use the compact spare tire as a temporary replacement only. Get your regular tire repaired or replaced, and put it back on your vehicle as soon as you can. Check the air pressure of the com ...

Taillight and Back-Up Light Bulbs
When replacing, use the following bulbs. 1. Remove the holding clips using a flat-tip screwdriver, then pull the lining back. 2. Turn the socket to the left and remove it. 3. Remove the ol ...