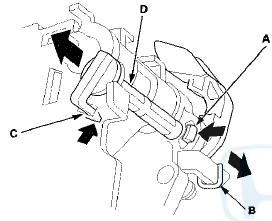 4. Release the lock (C) of the release shaft, and remove the shaft (D).

6. Install the release spring (A) in the shift lock release (B).

8. Make sure that the release spring end (A) is installed in the shift lock release (B), and the hooked end (C) is on the stop (D).

Compass Operation
Compass operation can be affected by driving near power lines or stations, across bridges, through tunnels, over railroad crossings, past large vehicles, or driving near large objects that c ...

CMP Sensor A Replacement
1. Disconnect the CMP sensor A 3P connector (B). 2. Remove CMP sensor A from the intake camshaft side of the cylinder head. 3. Install the parts in the reverse order of removal with a new O-ri ...