The front SRS airbags inflate in a moderate-to-severe frontal collision to help protect the head and chest of the driver and/or front passenger.

SRS (Supplemental Restraint System) indicates that the airbags are designed to supplement seat belts, not replace them. Seat belts are the occupant's primary restraint system.

The front airbags are housed in the center of the steering wheel for the driver, and in the dashboard for the front passenger. Both airbags are marked SRS AIRBAG.

Your vehicle is equipped with dual-stage, multiplethreshold front airbags (SRS).

During a frontal crash severe enough to cause one or both front airbags to deploy, the airbags can inflate at different rates, depending on the severity of the crash, whether or not the seat belts are latched, and/ or other factors. Frontal airbags are designed to supplement the seat belts to help reduce the likelihood of head and chest injuries in frontal crashes.

Front airbags are designed to inflate during moderate-to-severe frontal collisions.

When the vehicle decelerates suddenly, the sensors send information to the control unit which signals one or both front airbags to inflate.

A frontal collision can be either head-on or angled between two vehicles, or when a vehicle crashes into a stationary object, such as a concrete wall.

• How the Front Airbags Work 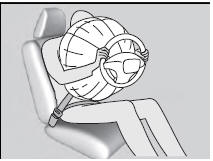 While your seat belt restrains your torso, the front airbag provides supplemental protection for your head and chest.

The front airbags deflate immediately so that they won't interfere with the driver's visibility or the ability to steer or operate other controls.

The total time for inflation and deflation is so fast that most occupants are not aware that the airbags deployed until they see them lying in front of them.

Although the driver's and front passenger's airbags normally inflate within a split second of each other, it is possible for only one airbag to deploy. This can happen if the severity of a collision is at the margin, or threshold, that determines whether or not the airbags will deploy. In such cases, the seat belt will provide sufficient protection, and the supplemental protection offered by the airbag would be minimal.

• When front airbags should not deploy

Minor frontal crashes: Front airbags were designed to supplement seat belts and help save lives, not to prevent minor scrapes, or even broken bones that might occur during a less than moderate-to-severe frontal crash.

Side impacts: Front airbags can provide protection when a sudden deceleration causes a driver or front passenger to move towards the front of the vehicle. Side airbags and side curtain airbags have been specifically designed to help reduce the severity of injuries that can occur during a moderate-to-severe side impact which can cause the driver or passenger to move towards the side of the vehicle.

Rear impacts: Head restraints and seat belts are your best protection during a rear impact. Front airbags cannot provide any significant protection and are not designed to deploy in such collisions.

Rollovers: Seat belts and, in vehicles equipped with a rollover sensor, side airbags and side curtain airbags offer the best protection in a rollover. Because front airbags could provide little if any protection, they are not designed to deploy during a rollover.

• When front airbags deploy with little or no visible damage

Because the airbag system senses sudden deceleration, a strong impact to the vehicle framework or suspension might cause one or more of the airbags to deploy.

Examples include running into a curb, the edge of a hole, or other low fixed object that causes a sudden deceleration in the vehicle chassis. Since the impact is underneath the vehicle, damage may not be readily apparent.

• When front airbags may not deploy, even though exterior damage appears severe

Since crushable body parts absorb crash energy during an impact, the amount of visible damage does not always indicate proper airbag operation. In fact, some collisions can result in severe damage but no airbag deployment because the airbags would not have been needed or would not have provided protection even if they had deployed.

Your front airbags have advanced features to help reduce the likelihood of airbag related injuries to smaller occupants. 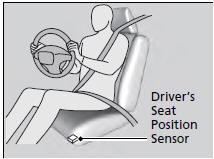 If the seat is too far forward, the airbag inflates with less force, regardless of the severity of the impact. 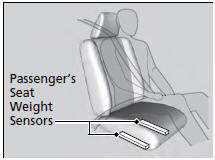 Although we recommend against carrying an infant or small child in front, if the sensors detect the weight of a child (up to about 65 lbs or 29 kg), the system will automatically turn off the passenger's front airbag.

If there is a problem with the driver's seat position sensor, the SRS indicator will come on and the airbag will inflate with full (normal) force, regardless of the driver's seating position.

For both advanced front airbags to work properly:

• Do not spill any liquid on or under the seats.
• Do not put any object under the passenger’s seat.
• Make sure any objects are positioned properly on the floor. Improperly positioned objects can interfere with the advanced airbag sensors.
• All occupants should sit upright and wear their seat belts properly.
• Do not place any cover over the passenger side dashboard.

The side airbags help protect the upper torso of the driver or a front passenger during a moderate-to-severe side impact. • Housing Locations The side airbags are housed in the outside edg ...